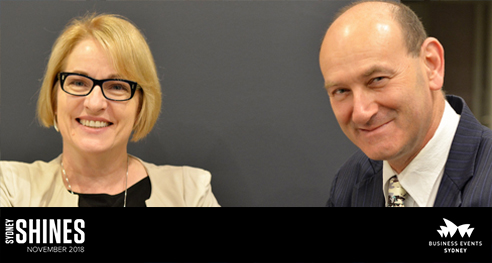 Margaret and Steven Faux are harnessing technology in very different ways to push health care into a new era of eﬃciency and breakthrough applications.

Scrawled on the whiteboard perched in Margaret Faux’s oﬃce in Sydney’s eastern suburbs is a cacophony of acronyms and arrows. An impenetrable code for those outside of the health system.

“That’s a bit of brainstorming for my PhD,” Margaret says, with a nod to the board. “There’s our health system on the board. And, that’s what I think it should be,” she says, pointing to a far simpler diagram.

Synapse, the medical health services company Margaret founded in 2009, simpliﬁes the billing, transcribing and coding services that the Australian health arena works within. It’s a big mission, with a huge ambition – to free up the time of specialists, allowing the health system to run more eﬃciently for all.

This panoramic vision is an attribute Margaret shares with her husband, the Director of the Rehabilitation Unit and the Pain Service at St Vincent’s Hospital, Associate Professor Steven Faux. At the heart of this vision lies another shared attribute: the determination to revolutionise health care through technology.

“Margaret and I have a rule: we don’t discuss her clients or my patients. But we do consult with each other on all manner of things. In fact, we often laugh about how we try and solve the world’s health problems from our bedroom – a cup of coffee in bed with the papers and hefty dose of universal health care is Sunday breakfast at the Faux’s, without fail!” Steven says.

Steven is currently working on the programs for a trial that uses virtual reality (VR) to help patients manage acute pain. His previous trials used VR to help stroke and pre-stroke victims understand what had occurred in their body to induce a stroke and what happened at the time of the stroke. The trials involved the patient adopting a VR headset and travelling through their own body.

“You take the patient into their own blood vessels, and you say, ‘Okay, this is where the stroke happened, you’re in this part of your head, and now just stand to one side, we’ll watch it happen. This is what happened’,” says Steven.

“You sort of adopt the clot, where it’s going, because it’s like being on a fantastic voyage. It’s amazing,” adds Margaret.

The trial on the use of VR in pain management will be launched later this year. Steven is collaborating with the UNSW School of Art and Design, led by Associate Professor John McGhee, to create the programs for the trial. Steven and John, who also collaborated on the stroke rehabilitation VR trials, are also in the midst of experiments in robotics, and are currently looking at the potential of VR as a teaching tool.

“They [UNSW] have built this room and we’ve put an avatar of a human in there. You can put the headsets on, slice the body in half and look at it from different parts: look at the joint, and turn it around. The idea is to teach complex anatomy to the students,” says Steven.

At the moment, St Vincent’s is the only hospital in the world involved in utilising VR for stroke and pre-stroke patients. NSW is also ahead of the game in terms of the research side of using VR in pain management.

“I think we’re the forerunner in research for it. The US is also leading the way in the use of VR in pain management, but they don’t have the same emphasis on research,” he says. “And, John’s [McGhee] work is internationally renowned.”

It is that reputation that has helped Sydney secure the International Society of Physical Rehabilitation Medicine World Congress for 2022. Steven led the successful bid to bring the event to Australia, partnering with BESydney and the Rehabilitation Medicine Society of Australia and New Zealand. He will now chair the local organising committee responsible for planning and hosting the event in four years.

According to Steven, hosting an event as signiﬁcant as this is an important step for Australia to help address global concerns and facilitate action for disabled people in the face of potential future crises.

“One of the issues with trauma that we’re trying to address at the Congress is the impact of having something like 68.5 million refugees in the world, many of whom are disabled. How can they cope with their disabilities when they’re being affected by forced migration and the ravages of war, and the psychological impact of being displaced? You need international conferences to get people from all over the world to come together and help address these issues and uncover solutions,” he says.

Margaret and Steven may appear to be avid technologists, but it’s far from the case. For Margaret, who was a registered nurse, the need for a simpler way to bill came out of necessity.

“I got sick of paper in my area . . . I just kept thinking that there has to be a better way of receiving this information. So that led me to develop Australia’s very ﬁrst medical billing app, just to replace the transfer of data from the bedside to the billing software,” she says.

This frustration has morphed into a mission to help improve health delivery systems across the globe. Synapse has branches in India and the United Arab Emirates.

“Health dollars are precious. Not just in Australia, but in every country . . . The end goal [of Synapse] is to make every health dollar fall into exactly the right spot,” says Margaret. “So that every dollar from the government or a private payer, drops into the delivery of health for an individual, not people along the chain.”

It’s clear that Steven and Margaret share a utopian vision for the potential of technology.

“You can’t turn off the Internet now,” says Margaret. “The horse has bolted, borders are down, it is one world …So technology is not a question of ‘are we going to take part?’, but how do we make it best ﬁt and work to the beneﬁt of all?”