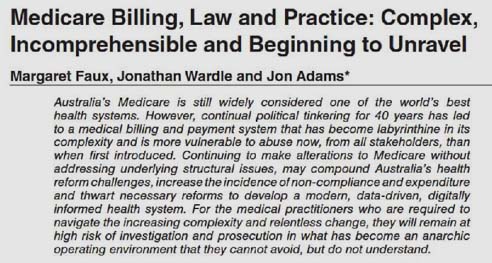 Australia’s Medicare is still widely considered one of the world’s best health systems. However, continual political tinkering for 40 years has led to a medical billing and payment system that has become labyrinthine in its complexity and is more vulnerable to abuse now, from all stakeholders, than when first introduced. Continuing to make alterations to Medicare without addressing underlying structural issues, may compound Australia’s health reform challenges, increase the incidence of non-compliance and expenditure and thwart necessary reforms to develop a modern, data-driven, digitally informed health system. For the medical practitioners who are required to navigate the increasing complexity and relentless change, they will remain at high risk of investigation and prosecution in what has become an anarchic operating environment that they cannot avoid, but do not understand.

The Nimmo report in 1969 described health insurance in Australia as “unnecessarily complex and beyond the comprehension of many”, and the report became the catalyst for the introduction of Australia’s first universal health coverage scheme, Medibank. 1 This article suggests that Australia’s current health insurance arrangements have again become so complex and incomprehensible that the system is beginning to unravel.